Why We Must Never Accept A New Normal 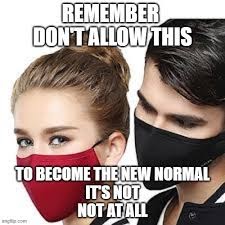 This is an article I wrote back in June of 2020 about the COVID-19 situation.

I remember when I heard it uttered for the first time. I remember how it made me feel.

When I saw the reporter on television say “This is the New Normal,” I cringed.

I knew right then and there that something had changed for us all. With this COVID-19 situation gaining steam in the minds of the public, this buzz phrase would be uttered time and time again on mainstream media to reinforce their narrative.

It has been said that if you say something enough to people, they will eventually believe it to be true.

It didn’t take long before everyone seemed to be on board with the catchy phrase.

I was amazed at how quickly people were willing to accept their fate, as if anything about this whole scenario was “Normal”.

It all seemed very scripted to me. Like the government and mainstream media were happy to unveil this new propaganda for the masses.

To me it was all very bizarre.

There had been other viruses that had come and gone like MERS,SARS, H1N1.

Influenza strains are constantly mutating every year and kill hundreds of thousands worldwide. What was so different about this particular virus?

Then it occurred to me.The realization hit me hard in the gut. Maybe everything was not as it seemed to be.

The science was not adding up. Many in the medical community were flabbergasted on why governments around the world, under the guidance of the WHO were shutting down pretty much everything.

I have never been a conspiracy minded person. I have seen many over the years and some I found interesting, many outright daft.

But now, with the situation worsening by the day, I had to start doing some digging. Something just didn’t feel right about all of this.

It was almost like I was still asleep having a nightmare that I couldn’t wake up from.

Some mornings I would wake up and hope that it was just a bad dream and everything would be as it had been just a few short months ago. And then I realized that this was our new reality.

I’ve heard it said that we should always trust our intuition. And I was trusting mine now.

I pondered, who was to gain in a situation such as this? How could they get away with restricting civil liberties on this grand of a scale?

But they had it all figured out, those evil clever dogs. It would be all in the name of public safety.

When has the fucking government ever been concerned about our health and safety?

People die every year because of foods and products approved by government agencies that slowly poison their citizens. People have never been sicker, and most governments spend more on “Sick Care” than anything else.

I’m not buying it, not for a second. This has never been about the health and safety of the public. The government and even our local public health may believe it is but that does not make it true.

To me it has always been about control and the profits to be made from mass vaccinations.

Isn’t it interesting that the Bill and Melinda Gates foundation is poised to become the largest single contributor to the World Health Organization?

Since when does a rich philanthropist wield so much influence over the health agenda of the world?

“If a private foundation were to become WHO’s highest donor, it would be transformational,” Lawrence Gostin, faculty director for the O’Neill Institute at Georgetown University and director of WHO’s Collaborating Center on National and Global Health Law, told Devex via email.

When WHO was formed as an intergovernmental organization, it “would have been unimaginable” that a private foundation could have such influence, he continued.

“It would enable a single rich philanthropist to set the global health agenda,” Gostin said, referring to Bill Gates, co-chair of the foundation.

Here is the man who just 3 months previous to the Covid-19 outbreak had planned a Global Pandemic Exercise called Event 201.

He has been planting the seeds about preparing for a new pandemic since H1N1 in 2009.

Does he want us to believe that he is doing all of this out of his love for humanity?

His contribution to the WHO and other parts of his agenda are tax write-offs and his vaccination aspirations will give him a massive return on investment and make him billions richer. But I believe it is more about the type of power he can wield.

Vaccine manufacturers around the world are working around the clock to be the first to usher in their rushed vaccines for scared and willing citizens.

How can we trust a rushed COVID-19 vaccine when we know it normally takes years of testing before vaccines are approved.?

I don’t know of any better business plan than having the whole population of billions of people to be required to be vaccinated. I cannot even fathom the amount of money this will generate,

especially with governments around the world doling out hundreds of millions for these precious vaccines.

I find all of this very curious because there have been multitudes of doctors all over the world saying that this virus does not necessitate lockdowns of society, social distancing, the wearing of masks, neighbors ratting out neighbors.

My friends, THIS IS NOT NORMAL!

The problem is that the local governments all over the world have put all their eggs into the WHO basket.

They have followed the WHO narrative without any questioning whatsoever.

Since when is science not questioned? The whole concept of science is to constantly question and prove or disprove various hypotheses. This is especially important with stakes as high as shutting down the whole fucking world.

To me, if we have learned anything from this pandemic, it is how easily governments can enforce controlling restrictions without much resistance from their citizens.

When governments wield such powers, they are very unlikely to forget how to use it.

Hence, I totally expect even more heavy handed restrictions going forward with a “second wave” in the fall.

There were only a few countries with the balls enough to go against their draconian lockdown proposal.

Countries such as Sweden and Belarus ignored the quarantine and have been vilified by the west for it.

Even though countries such as Spain who had extreme lockdown measures have had a higher death rate per million people than Sweden’s more relaxed approach.

Some would say that Sweden and other countries who didn’t lockdown are responsible for many unnecessary deaths. I would ask this. How well did governments in the west protect the most vulnerable?

In Canada, the outbreak at the Northwood L.T.C. facility in Nova Scotia facility accounted for 52 of the 61 deaths provincewide. Provinces such as Quebec and Ontario have had the majority of COVID-19 deaths in L.T.C.

These are the people the government needed to protect and they failed miserably. Yet many hail the government and public health officials as heroes for protecting us from more death and despair.

So to say that we need to accept a “New Normal” going forward until we get a vaccine is preposterous.

Will a rushed vaccine with little to no oversight save us from the evil COVID? I for one will never take a vaccine for a coronavirus or any other virus for that matter.

Would not the brilliant scientific minds of the world have already created a vaccine for the common cold (also a coronavirus) if they could?

To me these are valid questions that our mainstream media and citizens should be asking their government and public health officials.

So what can we expect from this so-called “New Normal”?

Having our children be afraid to play with their friends? No more handshakes or hugs with friends and family? Masks to be worn by everyone?

Extreme changes in the playing of sports? No tagging players in baseball, no scrums or fighting in hockey? Runners running races with masks on?

Will restaurants and bars, salons, or tattoo parlours only able to operate at 50% capacity have to close their doors because of the inability to turn any profit?

Is this sounding normal to you yet?

Is this the kind of world we want to live in?

If we as a society allow this to happen there will be no going back to the way it was before.

We all have a decision to make for our future as well as the future of our children.

Either we accept the “New Normal'' as the trusting obedient government run citizens they want us to be, or we demand to ask more important questions of our civil servants who are supposed to work for us, so that we may build a future that does not involve muzzling and restricting its citizens.

We need free thinking individuals who are not afraid to speak their minds, for the sake of humanity.

This is why we must never accept a “New Normal”.

Not now, not ever! Our very existence depends on it.